Get the latest news about retirement security & join the effort to protect California’s middle class from efforts to abolish pensions.

In the conversation around public pensions, there are a lot of myths that get repeated over and over again. We’re going to dispel several of the most common myths here.

Myth: Pensions are Underfunded and Unsustainable

Fact: Most public pensions are back on sound financial footing after the Great Recession and on a path to full funding. Recently, the Center for Retirement Research at Boston College predicted public pensions would achieve sustainable funding levels by 2018. One of the most important indicators of a healthy pension fund is a state’s actuarially required contribution (ARC). The ARC represents the amount of money a state needs to contribute each year in order to maintain a balance between money coming in and money going out. This helpful chart from the National Association of State Retirement Administrators shows that the majority of states have been contributing most of their ARC. 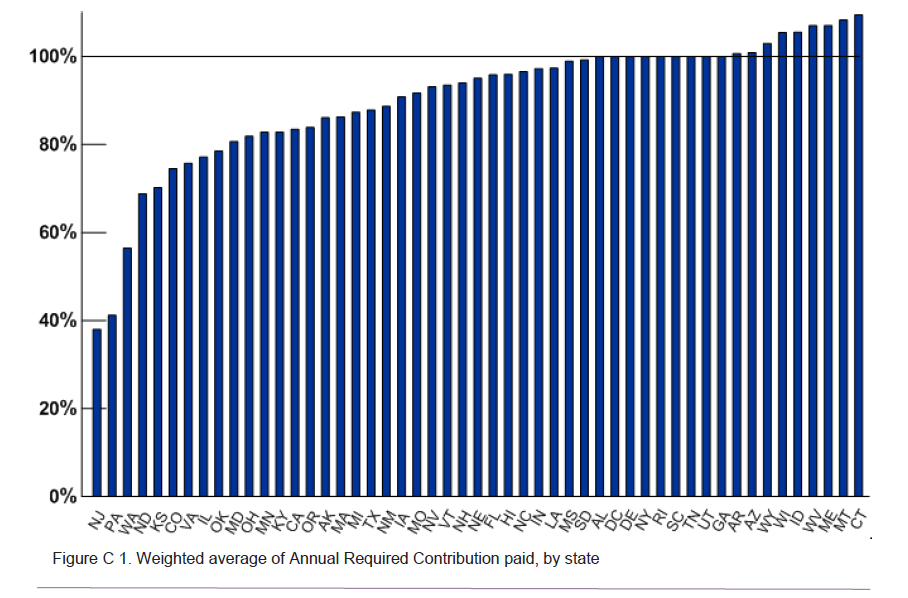 Fact: Far from abandoning traditional defined benefit pension plans, states in recent years have rejected bills that would convert their pension systems to riskier 401(k)-style accounts. Not only that, but certain states are considering moving back to defined benefit plans. In Alaska, a state that moved to a defined contribution system with disastrous consequences, State Senator Bill Wielechowski has introduced legislation to return to a defined benefit system. In a recent editorial in the Greeley Tribune, he warns other states not to follow Alaska’s path:

“…legislators should heed the warnings of states such as of Alaska, where we’ve learned 401(k)-style plans not only diminish recruitment, retention and retirement security, but actually cost the state more. When states act responsibly, Defined Benefit pension plans are the most cost-effective way to provide workers with retirement security… Recognizing the negative effects of retreating from a Defined Benefit pension plan, we have also introduced legislation to reinstate this option.”

Reality: Defined benefit pension plans afford the safest and most secure retirement for teachers, firefighters, nurses and other public employees who spend decades working for the public good and have earned their retirement.

Myth: “Reforming” the pension system will solve all fiscal problems facing our state and our communities.

Fact: Eliminating retirement security for teachers, firefighters, police officers and other public employees is bad for the economy, will force more Californians to turn to other taxpayer-funded social services, and will result in untold short-term costs with no guarantee of saving taxpayers in the long run. The nonpartisan Legislative Analyst says pension-changing proposals could strap taxpayers with billions more in costs during the next few years.

This is beginning to happen in places that have passed so-called pension “reform.” According to the San Jose Mercury News, that city’s police department is woefully short-handed, crime is up, and it is unable to fill its police training ranks with new recruits. San Diego also is experiencing higher costs. And taxpayers in both cities have been on the hook for millions in lawyers fees ($5 million budgeted in San Jose alone) for pension measures that have been ruled unconstitutional in courts.

California’s public retirement systems actually are better off than they were during Gov. Jerry Brown’s first term in office years ago. CalPERS was about 55 percent funded In the early 1980s, the final years of Gov. Brown’s first term and following another severe recession. And recent action by the Governor and Legislature are expected to trim $77 billion in cots.

As an investigative report by McClatchy Newspapers noted: “There's simply no evidence that state pensions are the current burden to public finances that their critics claim.”

Myth: Government workers don’t contribute to their pensions; taxpayers are on the hook to pay those costs.

Fact: Pensions largely are paid for by employee contributions and investment income. Public employees pay up to an average 12 percent into their own retirement. Teachers contribute 8 percent of their salaries to their pensions, do not receive Social Security and most teachers over the age of 65 do not receive retiree health care benefits either. They pay for their pensions with every paycheck.

Fact: Stockton’s bankruptcy wasn’t caused by the city’s police officers and garbage truck drivers, but from a combination of circumstances and decisions including lavish borrowing to construct a waterfront ballpark and entertainment center. In San Bernardino, pension costs last fiscal year totaled just 4 percent of its budget shortfall. That means even if pensions were eliminated entirely, San Bernardino would still have had a $43 million budget hole.

In a recent ruling criticizing Wall Street creditors in the Stockton Bankruptcy case, U.S. Bankruptcy Judge Christopher Klein agreed that the bankruptcy was not driven by pensions, saying a host of decisions and circumstances led to the city's financial woes including developments and tax breaks that could not be sustained because of the housing crisis and recession.

Fact: Public employees have been part of the solution to ensure public pension systems are financially sound. More than 600 new agreements have been signed in more than 400 jurisdictions where public employees are contributing more.

The reforms approved by the Legislature and signed by Gov. Jerry Brown amount to a reduction of somewhere between $60 billion and $100 billion in the benefits promised to public employees. Take for example, a public employee making an average salary of $40,000 and working for 30 years. Prior to the new state law, this worker would retire with a pension of $24,000. Now that worker will receive $15,600, a reduction of $8,400, which is not a lot to live on in California.

A recent study by the Center for Retirement Research at Boston College says that pension “reforms” made at the state and local level will restore the state’s public pension funds to pre-financial crisis levels. The study, “State and Local Pension Costs: Pre-Crisis, Post-Crisis, and Post-Reform,” looked at changes in 32 plans in 15 states (including CalPERS and CalSTRS). It notes that recently-enacted cuts to public employees “will, over time, improve the financial outlook for plans and help ease their impact on other budget priorities.” Researchers also found “in most cases, reforms fully offset or more than offset the impact of the financial crisis.”http://crr.bc.edu/briefs/state-and-local-pension-costs-pre-crisis-post-crisis-and-post-reform/

Fact: CalPERS had a 16.2 percent return on investments in 2013, and an 8 percent average return over the past 20 years despite the recession. Today, CalPERS is back to pre-recession strength. It has earned back the $97 billion it lost during the recession and then-some. Meanwhile, CalSTRS' portfolio returned 13.9 percent in 2013.

Myth: CalPERS pensioners can "goose" their retirement benefit upward by manipulating the income that gets included in their final year of compensation.

Fact: The Public Employees’ Pension Reform Act of 2013 (PEPRA) included several measures to reduce abuses. It requires that final compensation be defined, as it is now for new state employees, as the highest average annual compensation over a three-year period. This change prevents employees from artificially increasing the compensation used to determine pension benefits.
PEPRA also removed the opportunity for employees to buy “airtime,” additional retirement service credit for time not actually worked.

Myth: The average CalPERS pensioner gets 80 percent of their pay and are retiring with gold-plated pensions.

Fact: The average CalPERS member receives 50 percent or less of their pay in retirement. The average public pension in California is $2,945 per month. California retired teachers, who do not collect Social Security, earn an average $3,300-a-month after an average 27 years in the classroom. Six-figure pensions amount to less than 2 percent of public pensions and public employee pensions equal just 3 percent of California’s budget.

Myth: Police and firefighters retire at age 50 with 90 percent of pay.

Fact: CalPERS records indicate that over the last seven years, safety workers who retired at age 50 with 30 years of service represented 1 percent of all those retired. The reason very few ever would receive this level pension is that they would have had to start working age 20 to earn 30 years. Most start their safety careers at age 27, 28, or 29. Under PEPRA, the retirement age for misc. employees has been increased to 67 for maximum retirement and 57 for maximum safety retirement.

Myth: The State of California and taxpayers pay the total cost of public pensions.

Myth: Pension Costs for the State of California have increased by 2000 percent in the last 10 years.

Fact: The $400 million paid in 1999 was the lowest the State had paid in generations and it was due to the fact that the investment returns in the mid-1990s were so high, little was needed from the State to cover the plans. Some years, the State paid zero contributions for schools. This was due to higher than normal investment returns. Using a starting point of $400 million is misleading, because the late 90s was an atypical period for investment returns. In addition, payroll growth (bigger government) investment losses and people living longer and retiring earlier are the primary drivers of increased pension cost, not enhanced benefits. Employer contributions have actually decreased due to public employees paying more toward their pensions.

Fact: The State of California pays less as a percentage of payroll today than it did in the early 1980s.

Myth: Our state would be better off financially without having to contribute to teachers’ retirement benefits.

Myth: The retirement fund is a taxpayer giveaway.

Fact: Over the life of their careers, teachers contribute 8% of their monthly pay to their retirement. Employers kick in anouther 8.25% of monthly pay. The state contributes just over 2% (which previously was 4.6% but was reduced a decade ago). The returns garnered by CalSTRS investments do the rest.

Fact: CalSTRS is vigilant in preventing spiking. All extra compensation for teachers over and above their normal salary goes into a separate account that cannot be used as part of their final retirement salary.

Myth: Teachers retire early into a life of luxury.

Fact:  The average benefit payment is $3,300 per month, while teachers work on average 27 years for those benefits.

Myth: The CalSTRS system is headed toward insolvency.

Fact: While it is true that CalSTRS has a $70 billion shortfall, this is not an amount that must be paid overnight.  Just like a mortgage, this "balance" will need to be eliminated over 30 years, not in the first month's payment. Even under current economic conditions, CalSTRS has sufficient assets and projected contributions to pay benefits until 2044.

Myth: CalSTRS suffers from a lack of accountability and oversight.

CalPERS has an excellent website dedicated to myths and facts about pensions: